November 13, 2012 9:28 am You are here:Home Book and Reviews Book Review: The Three Stigmata of Friedrich Nietzsche: Political Physiology in the Age of Nihilism

Book Review: The Three Stigmata of Friedrich Nietzsche: Political Physiology in the Age of Nihilism 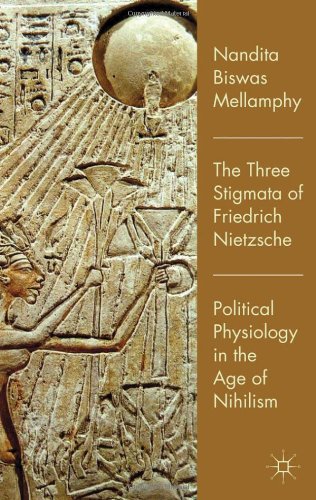 Mellamphy’s book aims to draw together three strands of Nietzsche’s thought: his ‘great politics’, his philosopher of the future and the eternal recurrence. Her claim is that they are ‘always co-extensive and mutually implicated’ (x); hence, a reference by Nietzsche to one of these concepts necessarily invokes the others. The future philosopher is ‘undoubtedly a political figure’ (with artistic features) (15); and, for the future philosopher, the experience of the eternal recurrence is central to the ‘task of establishing ‘great politics” (41). It is the emphasis on Nietzsche’s ‘re-articulation of the ‘political” (121) which is most prominent, though, as stated, Mellamphy takes the three concepts together.

First, then, a word about Nietzsche and politics. There has been a great deal of discussion about whether Nietzsche can helpfully be considered a ‘political’ thinker. To a certain extent, predictably, this depends on one’s definition of ‘political’. Despite occasional, scattered remarks, Nietzsche wasn’t interested in theories of resource distribution, and he often suggests that getting too excited about ‘the state’ is a poor substitute for getting too excited about God. In that sense, he was not political. Then again, Nietzsche often takes pride of place in classes on the history of political thought: he is very interested in the social structures of large groups of humans, the ideas those groups develop and the interaction between the two. What could be more political than that? Finally, Nietzsche sometimes suggests that being unlike those around you is valuable per se. This has implications for any constructive political view one would take him to have. It’s one thing not to express a strong preference for any particular mode of government; it’s another to suggest, as at least Zarathustra does, that you’re just better off in the mountains than you are with the masses in the valley. It is this kind of thinking that earns Nietzsche the title of ‘anti-political’: it suggests not merely a lack of interest in politics, but something further — a disdain for all collective human activity.

via The Three Stigmata of Friedrich Nietzsche: Political Physiology in the Age of Nihilism // Reviews // Philosophical Reviews // University of Notre Dame.